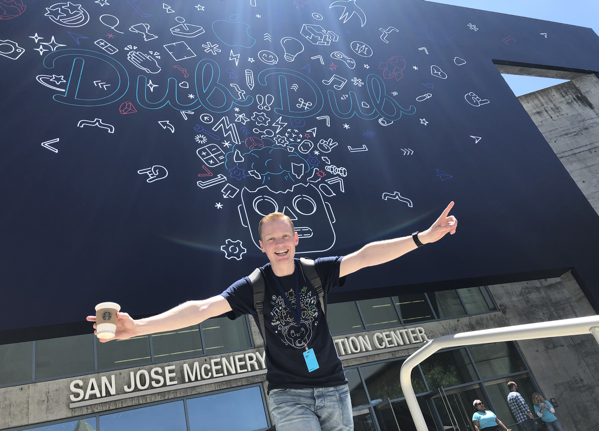 As an Apple Developer this is probably one of the most significant events of the year. This one week paves the year for most of the work that you’ll be doing during the summer and autumn season. Getting up to par with the new OSes, the new API’s, learning which API’s won’t be supported anymore and the realisation that you’ll have to start touching code you didn’t touch in 4 years.

I managed to arrive early in San José so I’d have some time to get used to the timezone and do some sight seeing. Basically the whole city is covered with WWDC signs, and everyone you see around is either going to the event or going to one of the smaller side events that have popped up in the recent years since Apple started selling out of tickets.

Wake up early (is reverse jet-lag a thing?) and get in line for the Keynote. Meet the guy behind Apollo (the best third party Reddit app around), get a free pin and realise you have something in common with everyone there and have some great conversations.

This wasn’t just at the keynote, but every line or event around WWDC. One of the best things was just being able to have conversations with everyone there.

One of the fun things about publishing this post so late is that I get the opportunity to get rid of some parts that don’t make any sense anymore, like me saying that every iOS app will have a Catalyst counterpart. Luckily I won’t make that mistake and we can just focus on the documentation being a bit lacklustre at the moment.

So what am I most excited about? SwiftUI, even though I realise that the tools currently are buggy, my machine is too slow for the previews and that there are very strange inconsistent behaviours between xcode versions and SDKs, I’m still excited. I’m not using it in production yet, and I probably won’t for a while. But knowing that Apple has focus on rolling out something new and not being scared to try something new is something I see as a good sign for the platform. I just hope that next year Apple focusses a bit more on the documentation so I don’t have to dive in to all the videos on SwiftUI (Session 204).

I would love to. It was great seeing the people I’ve known online for years in person, being able to see the people I listen in for multiple hours per week. Being able to walk to an Apple Engineer and get a 1-on-1 explanation of my issue instead of hoping for a response on Apple’s bug reporter. But on saying that, I don’t know if I will go next year. WWDC is expensive, especially if you’re not from the US and have to fly out, get expensive accommodation. There is a lot of preparation, especially for something you don’t know that you’ll even get a ticket for since it’s a lottery. That won’t stop me from trying though.